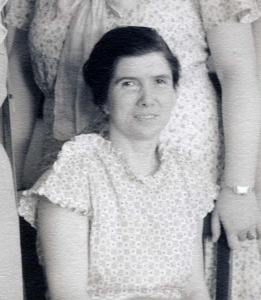 In 1932, the Maryland State Normal School (MSNS) hired a new registrar, Dr. Rebecca Tansil. She was originally from Georgia and a graduate of a teachers college program in a school that is now part of Vanderbilt University in Tennessee.

As MSNS transitioned to a state teachers college, Tansil worked to support students and new teachers. During WWII she became the liaison between the school and students serving in the Armed Forces. She wrote newsletters for the community at home and abroad, with information about service members well as changes that were happening on campus. She also crafted a survey to collect information about service members, and photographed many students in uniform standing on the steps of Stephens Hall. These photographs and letters were collected into a scrapbook that would feature details about 200 student service members, now held as part of the World War II Collection.

By 1948 she was named the Director of Admissions, and by the 1950s she was teaching Spanish in the Modern Languages Department.

She was known on campus for her charming southern accent, her stylish wardrobe, her love of travel, her many artistic hobbies, and her work raising and training show dogs.

She retired from STC just before it transitioned to Towson State College in 1963.

Photograph of Edna Heesh and Dr. Tansil from the 1950 Tower Echoes Yearbook An article on Dr. Tansil on page 4 of the April 14, 1954 issue of the Tower Light students newspaper. Faculty and administrators of the State Teachers College at Towson
This is from the quartex-front-end repo.